Although steel structures have been generally applied in industrial facilities in our country, they have gradually started to appear in school, shopping center and hospital projects. Although rarely, we see that steel is used as the main material in multi-storey buildings such as residences and residences. However, the number of these structures is almost negligible. In this article, we will try to answer questions such as what we should pay attention to in steel structures, what are the application stages.

One of the most important reasons for the use of steel is that the assembly is completed quickly and the work is delivered. Under all circumstances, the maintenance of the assembly process by personnel who comply with occupational health and safety conditions and have all relevant certificates will minimize adverse situations. We must make sure that the work machines to be used work in full performance as well as the adequacy of the elements that will make the assembly. 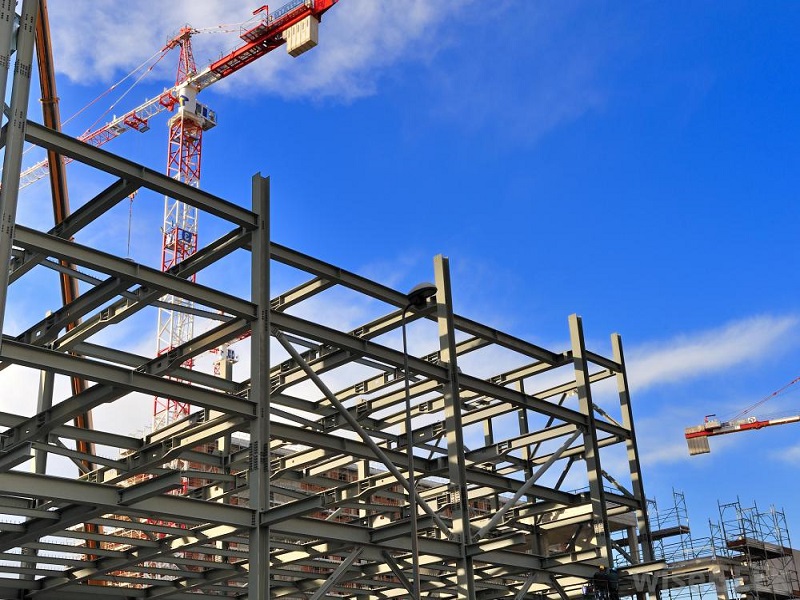 What are the Assembly Details of Steel Structures?

First of all, after the steel structural elements are manufactured in the workshops, they are brought to the construction site in the form of pieces that can be transported and the assembly begins. First, the columns are assembled. Columns come together with anchor bolts on reinforced concrete foundations. The first thing to be done before starting the assembly at the construction site; diameter of the bolts and material control. After this process, template plates should be prepared so that the bolts can be placed at the intersection points of the building’s transverse and longitudinal axis at the right intervals in accordance with the project. These plates can be made of thin plates for articulated columns. In addition, anchor group templates made with box profiles can also be used in built-in columns containing many anchor bolts. These should be put in place precisely with the help of various tools and their movement should be prevented.

The distance of these bolts to the edge of the concrete can be made smaller than the standards. But in such a case, after completing our system, when crane horizontal loads, wind or earthquake horizontal loads are transmitted to our columns in a crane structure; The concrete anchor bolt becomes incapable of transmitting tensile forces as it eliminates the adherence between the bolts and columns by cracking on the edges. In order to avoid such consequences, we need to make the necessary calculations and not compromise on security.

Anchor bolts should be connected to the base plates with double nuts for safety reasons and at least one more nut distance should be left on the second nut. Sometimes, we can see situations where this share is not left due to the fact that the tooth size of the anchors is not enough. In order not to encounter such situations, we need to choose our bolts and design our bolts by considering these negativities as much as possible. 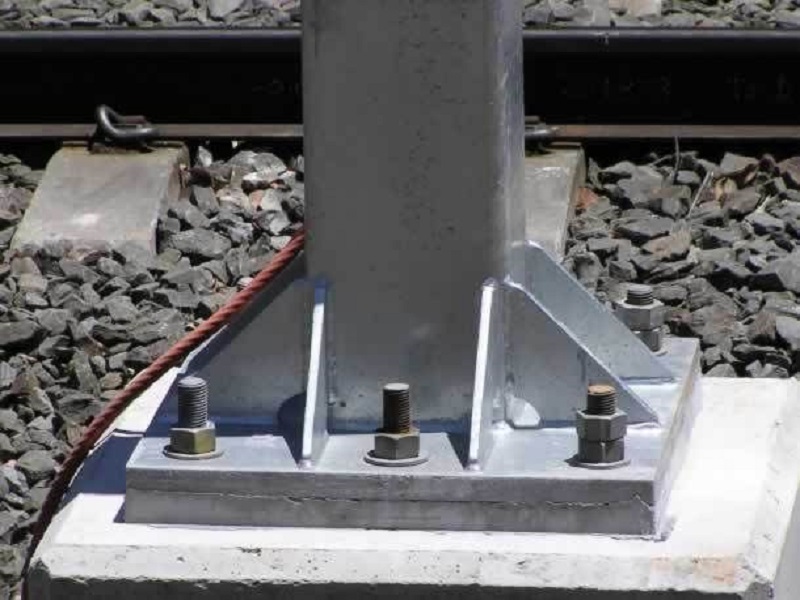 Another element that we need to place in our formwork together with the anchors is the slip wedge boxes. These will provide the necessary clearance for the slip wedge. These elements should be designed in such a way that they can be easily removed after concrete pouring. After the anchors are fixed and the concrete casting is completed, we can start placing our columns.

A few details will help us a lot in order to adjust the elevations of the steel columns and make their assembly.

The connection of our columns with the base plates should be exactly compatible with the project. Often the main columns are connected to the base plates by blunt welds or corner welds whose thickness has been calculated by certain calculations. We should definitely check these connections before assembling. Column joints should be at least 1/3 of the floor heights from the alignment of the base plate or floor slabs, as the specifications allow. However, this distance cannot be less than 1.2 meters for fillet welds or joints made with butt welds that are not fully penetrated. These joints should be made away from our support areas. We need to pay close attention to this detail.

After the assembly of some of our columns is completed, another team can start the assembly of the braces and frame beams. In single-storey buildings built for industrial use, the horizontal loads acting in the longitudinal direction of our structure are often designed and applied to be transmitted to the foundation with central or eccentric braced walls. 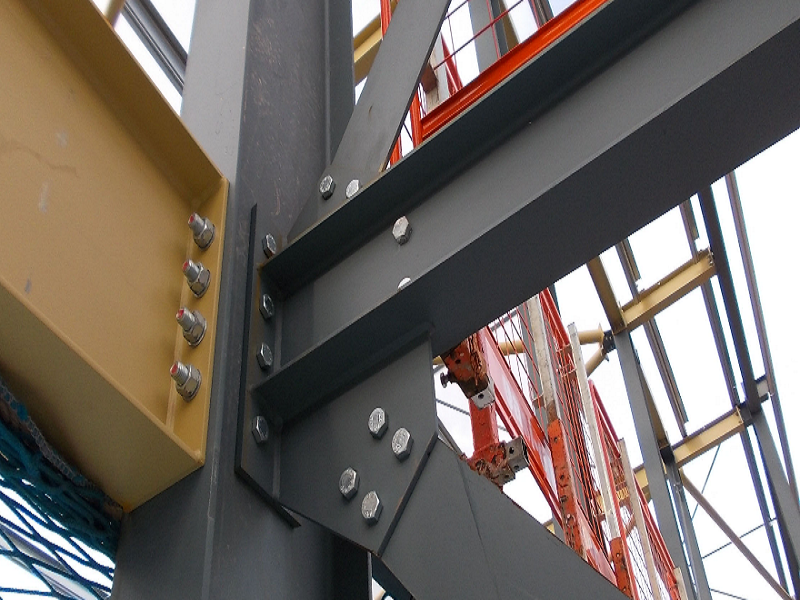 It is formed by roof trusses or full body frame beams that will form the moment frame with the columns in the transverse direction of the building. The joints of the moment-transmitting columns with the beams should be designed as a result of static calculations and the application should be in the same way.

In order for our roof frame beams to be assembled, the wall braces in the longitudinal direction between the columns must be connected and the base plates that make the foundation connection of the anchors of our columns must be placed. If we start the assembly before these steps are done, we may experience problems in the assembly of our beams.

As far as possible, our roof beams or trusses move away from welded purlin joints in order to have a continuous beam in the upper head plane; We should prefer these attachments to be made with bolts. Purlins transfer the pressures formed as perpendiculars of horizontal braces on the roof plane under the influence of earthquake and wind loads. For this reason, this detail should be taken into account in their connection with the roof beams and the calculations should be made accordingly. 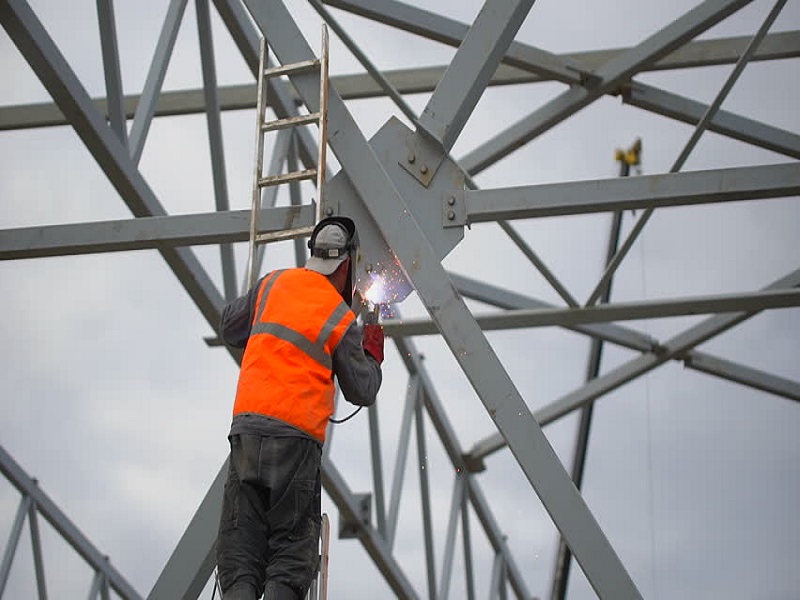 What are the Welding Details in Steel Structures?